Amazing Avocado Seed Benefits to keep you Hearty and Glowing

Chiggers belong to the Trombiculidae family. They are the larvae or the infantile of mites. They are so small that the naked eye can not see them. Their length ranges between 0.004 to 0.6 of an inch.

These trombiculid mites are mostly found outdoors in the park or wide-open areas, like fields, forests, or your private lawn where areas tend to be moist.

Their bites are not fatal, but they can leave you with an itching sensation. Chiggers bite by sticking their mouthparts into the host’s skin.

Once a chigger falls off your skin after biting you, it would leave a red bump on it with a red dot in the center.

In response to the chigger’s saliva, your skin forms a remnant of the tube, which in turn causes inflammation, and appears to be like welts, hives, blisters, or pimples.

Symptoms of a Chigger Bite

The symptoms show up usually around the skin folds, ankles or waist. The itching might stay for a few days. However, it may take one to two weeks for the swelling and wound to disappear completely.

Chigger bites are not dangerous but are extremely irritating due to the intense scratching it causes. Let us discover how to treat chigger bites naturally.

Chiggers take a few hours to latch to the skin and start digging into it. Once they start spitting onto the skin, it is then that the itching begins. So, the best is to remove them from your body before they start doing this. The easiest and safest way to get rid of them is by taking a hot shower. It works like a wonder and does not leave any symptoms thereafter.

As soon as you realize you have been attacked by chiggers, or as a precautionary step, if you happen to stay outdoors in a swampy region for long, the moment you get indoors, in your room, take a hot body shower with antiseptic soap, like Dettol. Having done so, you would have no trace of any chigger left on your body.

Baking soda works best immediately after exposure to chiggers but can even be very beneficial once it starts itching severely. The smell of it might be quite stinky, but it helps tremendously in beating the itch.

Mix equal quantities of baking soda with water and rub it thoroughly onto the body. Leave it for a few seconds before washing it off.

This process should be carried out immediately after exposure to chigger bites.

Castor oil works wonderfully in curbing the itching caused due to chigger bites. It soothes the affected area and reduces redness as well(1).

Take some castor oil in some cotton and dab it on the area where the chiggers had encountered.

You can repeat it on the affected area just after the exposure once and even later at night. Castor oil can be rubbed every time you feel its too itchy to tolerate.

There are certain foods which can protect you from bug bites, including chiggers and even relieve the itchiness and the aftereffect of a bite. So, before you plan your next adventure outdoors, have these and see how they assist in keeping these bad itchy bugs at bay.

Garlic has a peculiar smell and having it regularly can make your sweat smell of it too. This garlic odor from your sweat can help repel many bugs and insects, including chiggers, and save you from uncomfortable bites when trekking outdoors.

Include garlic in considerable quantities at least a week before your excursion or outdoor trip. It can be eaten raw or as a garnish on various food items during meals and even otherwise.

The enzymes present in milk is known to soothe the skin from direct sunburns and even from itchy bug bites. So if your skin seems to irritate you due to the itchiness and burning sensation caused by a chigger bite, use milk in a paste form to get instant relief.

Mix one part powdered milk with two parts of water. Add a pinch of salt to it. Then apply to the affected area. This should be done whenever the itch gets unbearable. Being a natural product, it can be repeated as and when required.

Common salt, or sodium chloride in chemical terms, is an excellent reliever of itchiness and redness and can provide satisfactory relief from scratching caused due to chigger bites.

Salt should be added to lukewarm water, and the exposed area should be soaked in it. This would not only provide relief from itchiness but also curb the redness and inflammation caused thereby. Also, this would help the venom of the chigger saliva from spreading further. 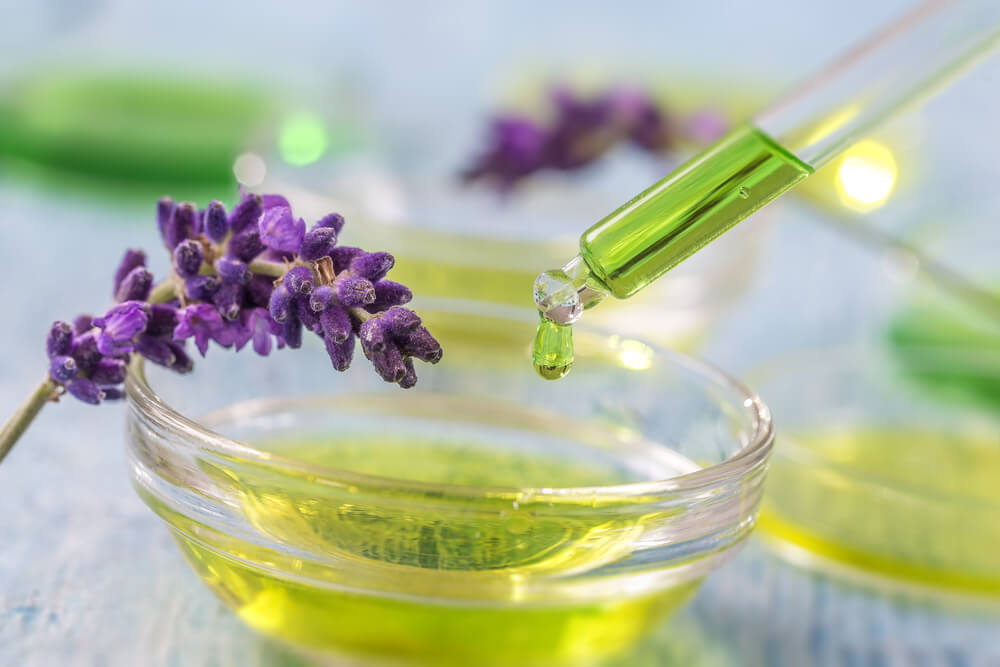 The lavender oil, created through steam distillation of lavender flowers, has an extremely calming effect on the body and mind. The itch, pain, and discomfort caused due to the chigger bite can be relieved by it is anti-inflammatory, analgesic and sedative components.

See Also
How To Cure

Take 2-3 drops of lavender oil and dilute it with a teaspoon of carrier oil ( coconut or jojoba). Now, apply it on the affected area with a cotton ball soaked in the diluted oil mixture.

You can repeat this process as and when required, depending upon the level of discomfort you may be facing due to the chigger bite.

Tea tree oil is extracted from the medicinal tea tree leaves or Melaleuca alternifolia plants which are known to be a highly potent anti-inflammatory agent in the world. Its antiseptic properties can draw out all the chigger saliva or the cell destructive enzyme out of your skin and even soothe the skin from itchiness, pain, and irritation caused due to the chigger bite.

Take 4 drops of tea tree oil and dilute it with a teaspoon of carrier oil ( coconut or jojoba). Now, apply the robust solution on the affected area with a cotton ball soaked in it.

The mild texture and earthy aroma of lemongrass originate from the spikey lemongrass leaves. The purifying and stimulating effect of this oil has anti-inflammatory, anti-itch and analgesic compounds that can provide relief to the chigger inflamed the skin.

4-5 drops of lemongrass oil should be mixed with coconut oil and applied to the affected area.

The steam distillation of stems, twigs, and leaves provide the extract for eucalyptus oil, which can heal all kinds of skin disorders. Its therapeutic properties relieve symptoms of chigger bites.

Take a few drops of eucalyptus oil in a cotton ball and apply to the affected area directly.

Chiggers are usually found outdoors in swampy areas. The best way to remain protected is to wear full sleeves shirts and full-length pants, but if you do not want to feel warm, you can even use chigger repellents like DEET to keep away from them. Also, avoid sitting on turfgrass directly. However, if chigger issues recur again and again on your property, it is best to get the infected area treated with a pesticide/insecticide that consists of bifenthrin. This chemical would assist in eliminating their population and keeping you safe and secure.

1. How Long Do Chigger Bites Last?

The entire resolution of the skin lesions, after a chigger bite, can last up to two weeks. They generally go away on their own.

2. How Long Do Chigger Bites Itch?

A chigger bite can leave the area red, flattened or raised. The itch caused is due to the presence of cyclostome, which may get intense within 1-2 days of the bite. The itching may carry on for many days.

3. What to Put on Chigger Bites?

Chigger bites usually do not need any treatment as they get better on their own. However, if the itching is too much, you can apply an over-the-counter ointment or creams, like calamine lotion or hydrocortisone. A cold compress or antihistamine pills can also help if the bites are severe.

Amazing Avocado Seed Benefits to keep you Hearty and Glowing

5 Super Foods That Can Heal a Fatty Liver

© Copyright 2020 - HowtoCure.com All rights reserved. Our website services, content, and products are for informational purposes only. We do not provide medical advice, diagnosis, or treatment.
Sign up for our Newsletter !
Get access to quality &
Natural Health Tips right from the Experts.