Vitamins are highly essential for healthy physiological functioning. They might be required only in small quantities, but a deficiency of any vitamin in the body causes major health problems generally referred to as deficiency diseases. Owing to the fact that vitamins cannot be internally procured by our body, we resort to external sources to maintain a balanced diet. This article deals with the incredible Thiamine Benefits or vitamin B1.

Vitamin B-complex consists of several different types of vitamin B, which co-exist and work in combination to protect the body and preserve general health. The different vitamins include-

So what is thiamine? The vitamin thiamine is actually vitamin B1 from the B complex family. Some of the most popular thiamine foods include yeast, beans, meat, nuts, and cereals.

Thiamine is highly beneficial for the treatment of digestive disorders like low appetite, diarrhea, colitis, and ulcers(1). It is highly useful for the enhancement of body immunity and physical performance. Thiamine is also used for boosting positivity, preventing memory loss and for fighting against memory loss. Read on to know more about the remarkable health benefits of thiamine. 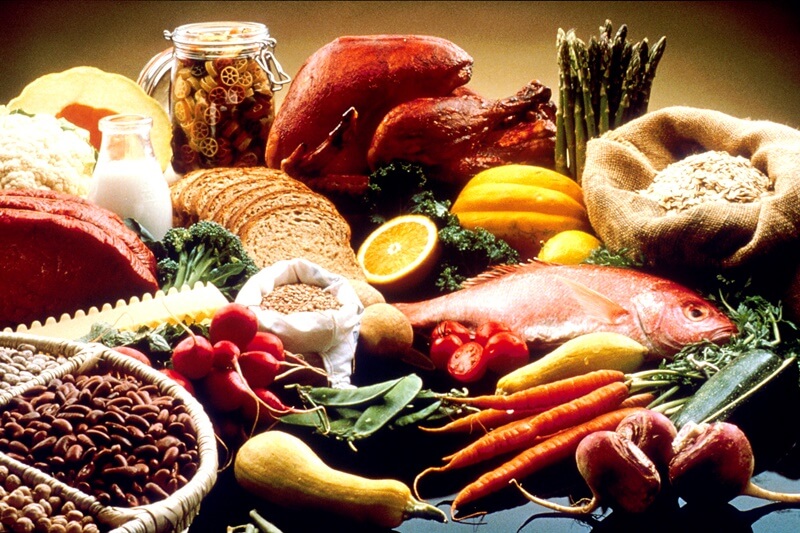 Enlisted below are some of the most popular foods that are rich in thiamine.

Other food items that are rich in thiamine are spinach, tomatoes, aubergine, potatoes, rice bran, sesame seeds, oats, dairy produce, barley, meats, fish, vegetables, and fruits. For people who have had a major surgery or are critically diseased, mere food is not enough. They need thiamine supplement to combat the vitamin’s deficiency.

Prolonged abuse of alcohol can have severely detrimental effects on health and psychology. Liver cirrhosis and cardiac issues(2) are two of the most severe effects of chronic alcoholism. Alcoholics contract an acute deficiency of thiamine over time.

Alcoholism induces dementia which is caused by prolonged depletion of thiamine in the brain. Consumption of huge amounts of alcohol interferes with the absorption of thiamine into the body and reduces its uptake. This deficiency of thiamine results in diseases like Beriberi and Wernicke-Korsakoff’s syndrome, severe psychosis and gradual degeneration.

Thiamine is highly essential for the functioning of the brain and central nervous system and the cardiovascular system. Consumption of alcohol destroys the gastrointestinal tract and prevents nutrient absorption.

Briefly stating, thiamine is responsible for three of the most significant physiological mechanisms that include-

To supplement with thiamine include the food rich in thiamine into your diet. Alcoholics are administered with IV thiamine to reverse the acute deficiency and ward off the risks of severe brain diseases and syndromes. The thiamine supplementary dosage is usually as high as 500 milligrams per day for alcoholics.

The goal of alcohol withdrawal is and should be long-term or permanent sobriety. This can be achieved by addressing the dropping levels of thiamine in the body with food that are rich in thiamine and low dosage thiamine supplement pills.

With proper administration of thiamine to alcoholics during the withdrawal period, it has been observed that cognitive functioning has begun to work fine. Even the health of the central nervous system and the cardiovascular system gets restored. The signs of recovery become noticeable within about three to four weeks of thiamine medication and diet with the definite improvement in memory, mental performance, and general health.

Enlisted below are few of the amazing Thiamine benefits for health-

Thiamine helps in the conversion of ingested food into glucose which is the main source of physiological energy. Thiamine aids in the metabolism of proteins and fats which is the basis of the functioning of the nervous system. Vitamin B is known for maintaining hormonal balance through proper functioning of neurotransmitters. Thiamine has the ability to improve body immunity.

Thiamine aids in the procurement of acetylcholine which is a neurotransmitter that helps in conveying messages between muscles and nerves and thus ensures healthy cardiac functioning. An intravenous injection of thiamine can save the patient from congestive cardiac failure. Deficiency of thiamine causes irregular functioning of the rate and disrupts its rhythm.

A cataract is an eye disorder that causes visual impairment with the formation of a dense and cloudy film on the lens of the eyes which is behind the pupil and iris. The cataract develops gradually and can block the vision entirely if left unchecked. Cataracts are quite common in people who are above 40 and are one of the chief causes of blindness.

If thiamine is incorporated into the diet along with other beneficial nutrients, then this vitamin B1 can delay the occurrence of cataracts or prevent it from occurring at all. 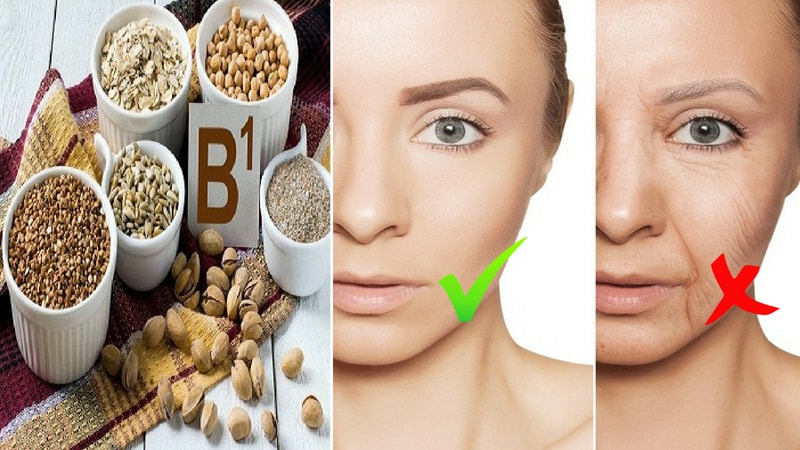 Thiamine benefits as a potent antioxidant that makes it an essential ingredient for health tonics for a skin. Vitamin B1 protects the skin from aging, wrinkles, and blemishes. Its antioxidant properties destroy free radicals and detoxify the skin. This helps to keep acne at bay. Vitamin B1 in your balanced diet is also essential for wrinkle-free and naturally elastic skin.

5. Protection of the Digestive System:

Thiamine aids in the secretion of gastric acid in the stomach which is highly essential for digestion. Regular consumption of food rich in vitamin B improves digestion and helps in the smooth functioning of the liver.

Our digestive tract suffers from a constant bombardment of toxins that come from the junk food we eat which damages the sensitive track with food poisoning, oversecretion of gastric juices and acidity. Thiamine helps to heal the damage inflicted upon the gastrointestinal tract with its antioxidant nature and ensures the proper nutritional absorption of food. It fights against toxins and enhances body immunity and nourishment.

Research has revealed that thiamine can delay the progression of the dreadful Alzheimer’s disease. Patients who had been on medication of thiamine supplement of 100 milligrams per day showed considerable improvement.

Thiamine helps to protect the human brain against damage caused by oxidative stress because of its antioxidant nature. This makes it play a significant part in the treatment of Alzheimer’s disease and prevention of dementia. It protects the brain against memory loss and helps to keep the memory intact even in old age.

Prescribed dosage of thiamine induces a stimulatory effect on the nerves in such a way, that the consumer can work endlessly with almost zero effort and feel constantly energetic and positive. It gets rid of lethargy and fatigue and stimulates the person to feel vigorous.

Thiamine benefits by enhancing the mental focus by inducing the generation of a large amount of acetylcholine that stimulates the mind to stay in focus and prevents your thought process from getting diffused. Thiamine induces the release of serotonin and dopamine that increases concentration power, motivation and span of attention. Thiamine supplement can be administered for the treatment of several disorders like palsy and multiple sclerosis.

8. Improve the Generation of RBCs

Acute alcoholism is characterized by slurred speech, delayed reflexes, abdominal cramps, nausea, and sudden phases of blacking out, liver cirrhosis, hyperthyroidism and more. Thiamine can protect the body from such effects with its healing powers. 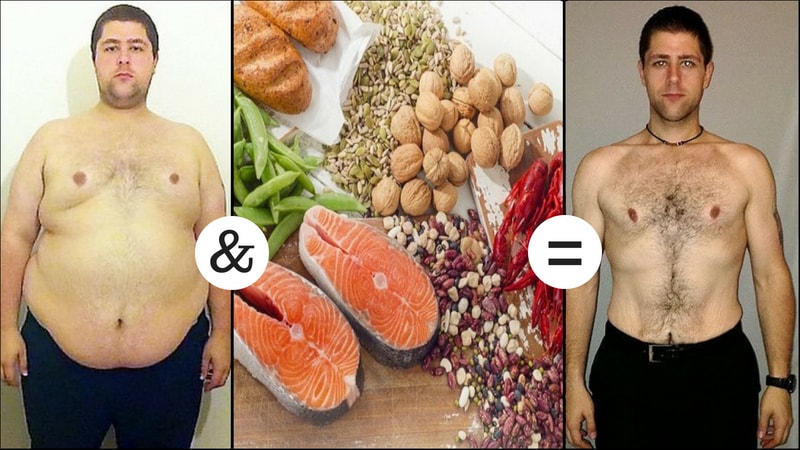 Weight gain occurs from binge-eating during stress, leaky gut, poor diet, hormonal imbalance and lack of physical activity. Thiamine helps to keep such factors in check thereby assists in the process of weight loss. It helps to maintain a balance in weight in women going through menopause as well.

Vitamin B1 is known for scalp nourishment. It improves the circulation of blood in the scalp and is the primary source of transmitting oxygen to the roots of the hair and the scalp. Its antioxidant nature aids in the secretion of natural oils like sebum in the scalp. This moisturizes the scalp and prevents the occurrence of lice and dandruff.

Thiamine is a rich antioxidant that fights against poisonous free radicals, protects the skin from damage caused by the UV rays of the sun(3), repairs broken skin tissues and thus prevent the skin from getting afflicted by cancer. Thiamine is an essential ingredient of sunscreen lotions that helps to keep the skin nourished and prevents the UV rays from damaging the skin.

15. Fights against Anxiety and Stress

Vitamin B is an effective cure for stress, anxiety, headaches, mood swings and migraines. It is even known to deal with attention deficit hyperactivity disorder. Being a “morale vitamin” thiamine benefits by uplifting the mood, quells depression and enhances positivity through the production of neurotransmitters like acetylcholine.

Thiamine, being a powerful antioxidant, can help to fight against increasing cholesterol. It prevents atherosclerosis which is characterized by stiffening of arteries due to the deposition of cholesterol.

For thiamine deficiency, a capsule a day is enough. If the patient is suffering from Wernicke Encephalopathy then the dosage varies between 50-100 milligrams in a day. For relief from Beriberi, the dosage is about 5-30 milligrams thrice a day for about a month. However, for the accurate dosage do consult with a physician. Do not go for self-medication as that is extremely dangerous for health.

A few generic side effects of thiamine include-

1. Is Thiamine a Water Soluble Vitamin?

Response: Yes. Thiamine has the properties to get dissolved in water.

Response: Thiamine is a vitamin which can be incorporated into vegan diet through fruits, cereal grains, and vegetables.

Response: No. The chemical composition of thiamine makes it insoluble in fat.

© Copyright 2020 - HowtoCure.com All rights reserved. We do not provide medical advice, diagnosis or treatment.
Sign up for our Newsletter !
Get access to quality and natural health tips right from the experts.